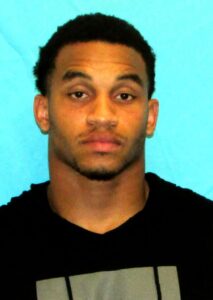 (Courtesy of the Frisco Police Department)

Professional football players are no strangers to run-ins with the law.  In the latest case to hit the headlines, Damien Wilson of the Dallas Cowboys was arrested on charges of aggravated assault with a weapon.

The linebacker was arrested on two counts aggravated assault with a deadly weapon after he allegedly backed his truck into a woman and then brandished a rifle shortly before a Fourth of July celebration in Frisco, Texas, USA Today reported.

The player is said to have become involved in a parking lot dispute at Toyota Stadium, home of Major League Soccer’s FC Dallas shortly before Frisco’s fireworks display. FC Dallas were playing the DC United.

Wilson is entering his third season with the Cowboys.  According to police reports, he allegedly intentionally backed his truck into a woman while parking. He then brandished a rifle at a man at the scene a rifle “causing him to be in fear.”

Wilson was released from jail after he posted $20,000 bond, arrest reports stated.

Frisco police are still investigating the incident and no further details were released.

USA Today reported Wilson is the second Dallas defender to be arrested during the offseason. Cornerback Nolan Carroll was charged with drunken driving in Dallas in May.

David Irving and Randy Gregory are also suspended starters in defensive ends. They could face suspensions even in the absence of convictions for violating the NFL’s personal conduct policy.

Earlier this year, Former Cowboys running back Joseph Randle was charged with assaulting another inmate in a Kansas jail.

The Wichita Eagle reported he was charged with aggravated battery and disorderly conduct after a confrontation in the Sedgwick County Jail. He has five criminal cases pending against him in the county, where he has been jailed since last summer.

One of the most infamous crimes committed by an NFL player concerned New England Patriots tight end Aaron Hernandez who was convicted of the murder of Odin Lloyd in 2013 and sentenced to life in prison.

Hernandez took his life in jail this year. A judge decided to vacate the murder conviction in light of the suicide, a decision that’s now being appealed.

If you have been charged with a crime like murder or an aggravated assault, you are likely to be facing a stiff sentence in Texas. Contact an experienced Dallas criminal defense lawyer here.