Two Police Officers Are Shot, One Fatally, in San Antonio. 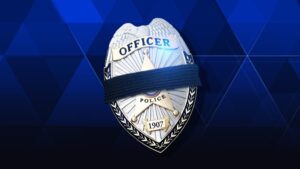 Another fatal shooting of a police officer in San Antonio has highlighted violence against law enforcement officers in Texas.
Last week, Texas Gov. Greg Abbott ordered state flags to be lowered to half-staff in San Antonio to honor Officer Miguel Moreno. He was killed in a shoot-out last Thursday and died a day later.
Moreno lost his life after he and his partner approached two men and one quickly pulled out a handgun and opened fire, reported Fox News.
Moreno’s partner, Officer Julio Cavazos, was also shot. He underwent emergency surgery and is expected to survive.
The gunman was later identified as 34-year-old Andrew Bice. He shot both officers before being killed himself in the shootout.
Police said the other man the police officers approached was not aware his companion was going to pull out a gun and is cooperating with authorities.
Cavazos was shot in the chin but he was still able to return fire, striking the assailant in the buttocks. Doctors said they discovered a fragment of a bullet lodged in his lung, according to media reports. A bullet struck his bullet-proof vest.
The police shooting was the second in recent months in San Antonio. Last year, San Antonio police Detective Benjamin Marconi was shot dead. Police said they believed Marconi was targeted because he was a law enforcement officer, reported CNN.

Legislation to make crimes against police and other emergency responders a hate crime in Texas was passed this year.

An 11th hour amendment added attacks against judges to the hate crime category.

The new law comes as Dallas Police Department experiences ever greater pressures due to shrinkage.

Recently the Dallas Morning News noted concerns about slower response times by the chairwoman of the Texas Organizing Project of Pleasant Grove.
At 3,139 officers, the department is considerably smaller than it was 10 years ago, when roughly 100,000 fewer people lived in Dallas, reported the Dallas Morning News.
The deadly ambush last year, a failing pension system and issues with 911 call centers, have led to an exodus of police officers, according to the report.
So called ‘Blue Lives Matter’ laws have been introduced in a number of states. However, opponents have warned they could dilute the original intention of hate crimes laws which are intended to protect minorities.
The American Civil Liberties Union and the Anti-Defamation League (ADL) argued expanding hate-crime laws to include police would be counter-productive.
In the present climate of fear, we may see extremely harsh sentences being brought for crimes against police officers. If you have been charged with a crime of this nature, you should contact an experienced Dallas criminal defense lawyer.